Drifting away from the Female Persuasion

Growing up I binged on Harold Robbins like I fall down the Netflix rabbit holes today; for more serious fare one went to the old masters – Austen and Dickens, Edith Wharton and James Joyce. The Nobel was an announcement that kept things contemporary with a phase lag – you read Naipaul and Gordimer and Alice Munro when they had a body of solid work behind them, not when they were struggling and flawed. Then Rushdie happened and Roy; and just like that India was folded into the global embrace – we too checked out the Pulitzer and Booker shortlists and the Top 100s and I am now faced with the same conundrum as everyone.

I need to choose wisely.

In a world full of echo-chambers and short attention spans, this is not easy; it is important that I do not get swayed by the easiness of a book, its ideas, and its readability. And that is where the Female Persuasion worried me. This book belongs in my particular echo-chamber. And it is a very easy read – highly relatable and full of interesting vignettes.

But correct for these, and you realise the book is nothing much. I will not go so far as to say it is soulless like The Little Bee – the author Meg Wolitzer is after all a woman and there is a lot of lived through experience flowing from there – but it is formulaic in its premise and falls short of its promise.

The female persuasion tracks the lives and histories of a motley group of characters. The central character is Greer (!), who apparently is gifted and hardworking and manages to find some semblance of actualisation. The other characters in the book are people who matter to her – her BFF Zee (earlier called Franny, yes), her long-time boyfriend Cory Pinto, her mentor Faith Frank who she adores. The book is an examination of the Female question through the eyes of Faith, the older woman, the seasoned veteran of the second wave of feminism and Greer who looks at the feminist question today. It ends up being a superficial look at people engaged at a superficial level on issues that matter. I wonder if Wolitzer is making a meta point of the pointlessness of what the feminist movement is today. That would be too good to be true (but who knows - the author uses a failed mentoring initiative as a device to bring about a mentor-mentee meltdown elsewhere, so there is some meta stuff going on there!)

Yet it is carefully observed and well-written. Here are the bits I liked for one reason or the other in no particular order-

I felt that is what it was – an over crafted shallow look at women’s concerns, by women who meet at the manicurist and climb the ladder at their library to address their dear friends' hair partings. Gah. While the men make the money and fund all this. Gah to the power Gah.

For millennial perspectives read Sally Rooney. For Female perspectives, get a job in the real world, earn some money and mentor more women, to the point where you forget manicures and blowouts. I am serious. This is no third wave – this is the top one percent in its ivory tower not even seeing what is keeping them there. No better than the harem favorites who thought they were powerful until their men came tumbling down. Noor Jahan like.

Everything Under - Daisy Johnson 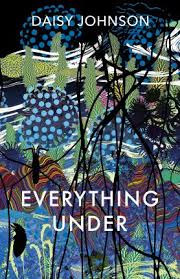 Daisy Johnson’s book is about the dank underside of England, of people who drift and understand predestination quite differently from their imperial forefathers.

‘Everything Under’ is the story of Gretel, struggling to care for Sarah, the mother who abandoned her, while trying to unravel the mystery of the initial desertion, in a race to the finish with the Alzheimer’s that is fast claiming Sarah’s mind. Interspersed is an account of Gretel’s search before she finds Sarah again and the discoveries she makes along the way; intertwined are tales of Charlie, who could have been Gretel’s father, of Margot, of Marcus, his backstory, and most importantly Marcus’s destiny. The narrative is suspenseful and makes for gripping reading, if only by the author’s device of breaking up all accounts down into bits and strands and jumbling them up into a glorious jigsaw puzzle that Margot might have liked.

Warning: The end is mildly anticlimactic, given the plot twists that precede it.
In all this, Everything Under is also a story of people blown to river-shores by the draughts of modern life, living on boats in generally wild and uncomfortable conditions. These people are sort of outside the pale of society, the authorities having given them a wide berth, many times because they do not even know of their existence. They apparently have their own amphibian society and code, and at first glance are not very different from the gypsies of yore or favelas of today. The difference however is that of agency. People who choose to live on riverboats in this day and age, in particular the personalities of Charlie, Sarah and Marcus are stamped with an individuality, which is not the province of your everyday slum-dweller/ trailer-homeowner. And that is where the question of inexplicability arises. Sarah styles herself as a giver upper and leaver and one could do that – taint them with a flaw and condemn them; or one could ponder like Daisy Johnson on why people do the crazy things they do. If these otherwise competent persons cannot help make their eccentric and sometimes terrible choices, is it then written in the stars, in the constellations that Gretel has pored from under as a child? Is it prophesied and is it impossible to escape the clutches of what is meant to be? The author looks to Greek tragedy for inspiration to explain the inexorable forces that make people do bizarre stuff but the actors in her drama are not looking to Sophocles – they understand that fear drives them and they have a name for that which is feared: the Bonak.

I read the book on the banks of the Douro River and as I walked in the twilight along its towpath, looking for a stone wall to break my coconut (a Friday ritual of mine), I shivered. There is something unnerving about the riverside at night. But Johnson’s descriptions of the Bonak are underwhelming – they certainly do not capture the eerie essence of the man versus nature dynamic in the night. One gets it, because one has experienced it and it is in one’s culture – in Africa and South India, you never say the word “snake” at night, for you may conjure it like Gretel thinks they might have with the Bonak— but the book does not convey it and that takes away its punch.

What comes through however, without much fanfare, is the solitary steeliness of these ignored ‘feckless’ people, and an unyielding non-conformism that is as baffling as it is awe-inspiring in today’s mapped out, fully googlable world.

That is the good part. On the flip side I could not shake a suspicion that this is a book constructed for publication. It is too similar to Tinkers, (reviewed elsewhere) in its take on forgotten people who are out of the mainstream. Perhaps their time has come at last. Or it is just a clever choice of subject being turned into Booker material by infusing Greek myths – the oldest creative writing exercise there is by the way. And it is not lost on me that Daisy Johnson too, like Tinkers writer Paul Harding has studied Creative Writing, that she belongs to a species of people who are writing for the art of it, whether they have a story to tell or no. I am not at all sure if that is a great thing. Also, I can do without the pages devoted to lexicography, paper making, typesetting, and other abstruse professions I have no interest in, that I am forced to read about because authors think they add "the lyrical". Irrespective, just as most western reviewers are struck by the mythical/ pagan angle in Everything Under, I as an Asian am curious about the river people. I do not really know what it is to be a recluse yet and such people intrigue me. If they are simply a ruse to lure a reader in, place a plot in, then the book becomes a sham for me. Tinkers had authorial authority; I am afraid Daisy Johnson has appropriated the river people for her literary ends and I do not like it.